It’s been three weeks since Target launched their collaboration with Victoria Beckham.   The buzz in major trade press has faded and only a few bloggers (The Budget Babe, Target-Addict)  wrote reviews on the good, the bad and the ugly of the collection. But if you visit your local Target store, the odds are you’ll find quite a bit of Victoria Beckham for Target back on the sales racks.  There’s also a lot of Victoria Beckham x Target back in stock on Target.com at 30% off. 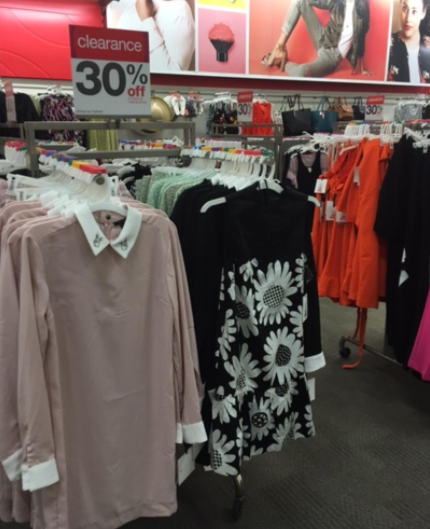 Victoria Beckham for Target is now 30% off in-store AND online. Image via Target-Addict Blogspot.

I predict that soon, you’ll see quite of bit of it on the Target clearance racks (note as of May 3, 2017, some of my readers reported seeing the collection now on clearance–see the comments here.)  On eBay, there were once over 6,000 listing for Victoria Beckham for Target. Now there are far fewer eBay listings  for Victoria Beckham for Target with just over 2,000 items for sale.   Many of the listings have zero bids. Three weeks after the launch there’s a lot of Victoria Beckham for Target on the racks at this Los Angeles Target store.

Clearly, this collection wasn’t the sell-out that Target wanted and that the mainstream fashion press predicted.   What happened? Many consumers don’t like the style or the fit of the collection. I have heard from many of my readers about this via comments and direct messages on Twitter.   While there are some pieces I bought that are well done for a Target collection (the black & white sweater, the bee scarf and the blue lace applique sweatshirt) there are many pieces that are absolute misses (mostly the women’s dresses.) Lonely shift dresses from VB x Target on the racks at a store in Los Angeles.

I’ve  visited several Target stores in California and North Carolina where there is plenty of Victoria Beckham for Target left languishing on the racks. The mini-skirt styling, boxy cut with no variance for bust, waist or hips of the Victoria Beckham dresses are a fail for many women. When women buy clothes, they want to buy clothes that are figure flattering and make them feel good about themselves.  Unless you’re a sample size with no curves, the odds are a Victoria Beckham for Target dress won’t look good on you.

“I can honestly say I have never felt so ugly than when I looked in the mirror at myself wearing her clothes,” Target customer Raeanne Jones told Britain’s The Sun paper.   Ms. Jones is not alone in having negative sentiment about the quality and fit of Victoria Beckham for Target.   My friend and fellow blogger Target-Addict described the fit of the Women’s Blue Stripe Poplin Gathered Waist Dress as like a “flour sack.”   One of my readers, Kate noted in a comment on my review, ”  The long black pants were a huge disappointment as they were cut without any room for actual hips-very specific body type only. I too found the dresses to be impossibly short and in particular, the few skirts were insanely short.”   Most women want their skirt or dress to allow enough fabric so that when they sit down, it covers their butt.  A longer skirt is also more flattering on the majority of women. The result is a better fit with the Victoria by Victoria Beckham dresses,  because of the stream lined silhouette and the allowance for the curve of the hips.  However, the Victoria by Victoria Beckham dresses are several hundred dollars more than the Target dresses.   Could Target perhaps have replicated the original dress design by allowing a bit more fabric, cutting it a bit wider at the hips and then charging a little bit more for the extra fabric?  Yes, but then Target probably couldn’t have sold the dress for the cheap price of $40.00.

One of my readers, Victoria Graham noted, ” The quality of the bee blouse is shocking the fabric is cheap and the collars don’t sit right my guess is they cost $2 to make. The fabric creases like a dish cloth. Great quirky design and print but the blouse/shirt is so so cheap looking really hard stiff fabric. Such a shame as had such high hopes for this cheaper brand. Both the Cala Lilly and bee scarf are divine though.”

Bottom Line–Target is getting a little bit of a wake up call from consumers.   They get an A+ for marketing & advertising and a C on execution, fit and product.   This Target collection may have had been a great idea, but at the end of the day consumers aren’t buying the hype and are returning the goods.

PS– see the comments below, my readers are reporting that it is already on clearance as of May 3 in-stores.